Less than one week before independency celebrations will start in Juba - African people, who are caught in besieged Nuba Mountains on north side of the new border between the newest, 193. world country called now South Sudan, and that which remains of old Sudan – are preparing for long bloody war.

Dictator of Sudan accused of four major crimes against humanity by International Criminal Court - Omar Hassan al Bashir - declared on referendum days in January, that in case of separation there will be no mercy for African ethnic groups left in the North Sudan.

More and more locals are disappearing. Men are sending their children and wives up in caves in the mountains and joining SPLA units all over the place. Chinese made MiG 25 and Russian Antonovs are howling and shooting day by day and giving us all their iron in the blood stream. It is not easy to walk around so heavy. You can not work much. You can not do much. You feel death is so close.

Anyone I talk to feels betrayed by their co-fighters for basic human rights in South Sudan from Africa's longest war, as well as by the whole modern world talking so much about respect and democracy.

I wrote two books and produced two documentary films about this most sensitive, most fair, most honest people on the planet, who are still living in closest contact with nature. I have been trying to present their culture and special qualities to broader public since 1979. Now I feel I did not succeed. Last night I got such awful feeling that everything was to no avail. While the world does not want to even watch – the enemies of this superior tribal societies, the traditional slave hunters in the north are taking over the rich land, the water, the sky, …

Yes, the sky. Whoever has the air, has the control of this mountains, this mountain fortresses which protect its people since primordial time and give them security, terraced fields (where they cultivate their staple food sorghum), water, no white ants (who eat everything wooden), cooler and healthier atmosphere … and shelter. The local indigenous people believe that this land is somewhat like paradise. Here, if anywhere on Earth, I found people living in simbiotic relationship with animals, plants, minerals and each other.

Of course most of us remember Nuba from famous books by Leni Riefenstahl. But there is more to show and tell. This people are not only olympic gods, they are the most kind, never whining, never complaining guys I discovered anywhere anytime in my constant travels.

Now they should be complaining, more than Darfurians, but they are not.

They are just humbly preparing for the last big fight, after whole world betrayed them because of higher geostrategic economical interests.

The grand design of northern elites is to exterminate »savages« from good, well-watered cotton soil, so useful for mechanised farming and of course: from the only oil-producing province that will remain in North Sudan after the South separates - South Kordofan …

They will fight, yes. They will never give up. They have nowhere else to go.

The saddest thing is that so many will die, killed by the elite in Khartoum, who are already accused of four main crimes against humanity, genocide included.

Together with their innocent and friendly children they will be killed and exterminated by ignorance, arrogance, hypocrisy … and cannibalism of the brave new world.

Resettlement from the first war may take over. Other people from the north may use this fertile land and water resources for mechanised agriculture and industrialised farming. Old Grand Design may win.

They still count on us.

But day by day less and less.

Poems reading teacher yesterday in an interview said: "Maybe Obama will help us. Maybe. We have nowhere to go."

The pressure is building each day closer to July 9. After this date, regime in the capital Khartoum will start implementing their policy of Sharia law, no tolerance for ethnic diversities, "Ein land, ein folk, ein führer". This is why Nuba started fighting for their right to be Nuba in 1980s together with African tribes in the South. It is more than just battle to protect the land, water, … It is battle to protect the best of human values. It is battle for the best of humanity.

"The counterinsurgency fought by the Government of Sudan against the rebels of the Sudan People's Liberation Army (SPLA) in the Nuba Mountains of central Sudan during the early 1990s was not only exceptionally violent, but also aimed at depopulating the area of civilians. Not only did the government aim to defeat the SPLA forces but they also intended a wholesale transformation of Nuba society in such a way that its prior identity was destroyed. The campaign was genocidal in intent and at one point, appeared to be on the brink of success ..."

"The war was notable for attacks on civilian targets with forced displacement, rape and killing. The principal instruments of counterinsurgency included locally-recruited militia, the regular army and the air force, under the overall coordination of Military Intelligence ..."

"The early period of the war was marked by militia massacres and extra-judicial executions by military intelligence. In a mixture of reprisals and counter-insurgency, some of it pre-emptive, a coalition of military officers and local militia commanders escalated violence against the Nuba. The first step was the arming of local Arab tribes by the government, initially as a panicked response to an SPLA attack in the region in 1985, and in 1989 they were formalized into the 'Popular Defence Forces'. The militias committed the worst massacres of the war, driven not only by orders from their paramilitary command, but also by their own search for cattle, loot and cheap labor ..."

"Death squads targeted community leaders in rural areas, while intellectuals in the towns were rounded up by Military Intelligence and 'disappeared'. The rationale was explained by Khalid Abdel Karim al Husseini, formerly head of the security in the Office of the Governor of Kordofan (and younger brother of the governor), until he left Sudan and sought asylum in Europe in 1993. He said that the government was 'taking the intellectuals, taking the professionals, to ensure that the Nuba were so primitive that they couldn't speak for themselves'."

All of this - all of it - is again evident in the conduct of counter-insurgency war: the extra-judicial executions; the targeting of intellectuals and indeed all Nuba; the arming of Arab militias and the Popular Defense Forces (PDF), the latter now entirely Arabic; the depopulating of the Nuba Mountains; the campaign to deny food and humanitarian assistance. And as the Small Arms Survey makes clear in its report on arms in South Kordofan ("Armed Entities in South Kordofan", June 2011), the Khartoum-allied militia groups are extremely heavily armed and supplied - this in addition to the growing SAF military presence from Dilling to Kadugli.

They have been capable of surviving in the last war with traditional enemy – but they may not succeed this time. Traditional slave hunters have too many friends now with too many guns. Who are stronger day by day. And friends of Nuba, rare friends who understand them and respect them are day by day just talking and talking and are day by day weaker.

But it is still not too late to help this superior humanity to survive. We have less then a week to close the sky »from where - instead of good as before – the evil is coming« as said one of the Nuba teachers yesterday.

One week to impose NO FLY ZONE!

This is what they are asking us and what they need from us. The rest they will do by themselves.

Please spread the images below, ask your friends to save innocent beautiful people on the border between new country of South Sudan and what remains in the North.

See interview with their leader - whom everyone I spoke to respect and trust - Abdel Aziz al Hilu - to understand how it all started.

Tomo Križnar, with the mothers and children who should not be here anymore 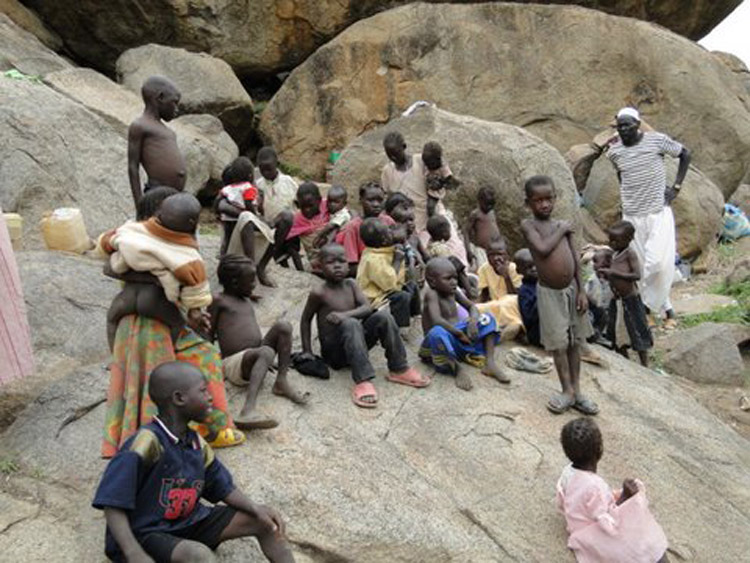